Forests from a climate viewpoint-

I live in the center of the Plumas National Forest, located in the northern Sierra Nevada.  It is  owned and managed by the federal government

and is just over a million acres in size (1,563 square miles).  As of this writing, California has lost four times this much territory to wildfire, with thousands of homes, businesses and buildings affected, and dozens of lives lost.  We’re still a month away from the November, 2018 beginnings of the Camp Fire which wiped out the town of Paradise and killed 85 people in a single wind-driven blowtorch event.  Thus far this year, it’s 30 souls.  Climate change is here, it’s real, and we can expect more trouble ahead until we change course.

Aside from these gruesome and immediate statistics  and what more may come until possible rainfall—California is losing its carbon storehouse by wildfire.  Carbon locked into wood was siphoned from the atmosphere, just like it is by all plants and crops.  Forests store carbon for long periods unless they burn.

If woody mass is cut for lumber or other woody products, nearly all of this stored carbon will remain tied up within construction that will not return to the  atmosphere.

If a tally of fire-based carbon release could be assessed so that it could be compared to carbon savings by past improvements in vehicle fuel efficiency over decades, the numbers might be shocking.  Some might be so disappointed as to throw up their hands in exclamation that it’s futile to keep chasing emissions reductions, so why do it?  I say if we adopt that attitude in government policy and regulation, we’re asking for an acceleration of wildfire damage, continued mega-drought, sea level rise, and other disruptions that we cannot afford. 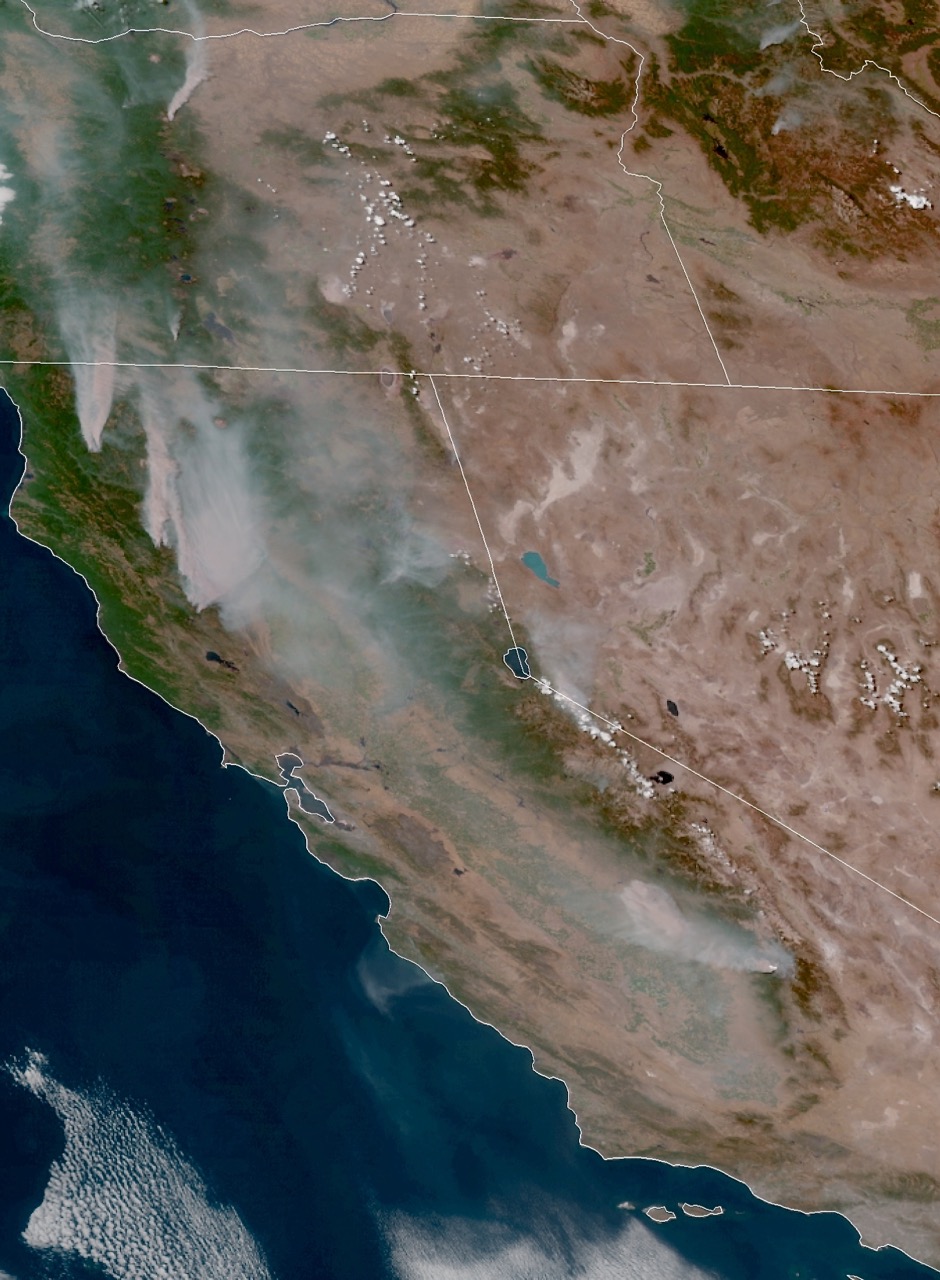 As we are finding with COVID-19, there are limits to bailouts by the federal government.  Without putting an increased price penalty on carbon we’ll bring quicker climate change.  That damage and those costs would be many times greater than weaning ourselves off fossil fuels (sooner) would be.  Everyone still living has a stake in this choice affecting their health (i.e. a recent month’s worth of smoke inhaled) and safety (thousands evacuated or their homes destroyed since late August).  The extractive fossil businesses keep telling us our economy will be ruined unless we preserve the current carbon-based model, but there are alternative paths for our survival that override their business preference.

And direct from California’s Capitol-

Governor Gavin Newsom has witnessed wildfire damage personally, including in 2018, when a very special visitor from the east coast strolled the Paradise ruins with him, insisting that if our state would just rake all the forests they own, fires would be no problem.

It’s very expensive to put wildfires down and out. California is already on the way to a significant de-carbonization effort that’s anchored in statute (SB 100).  California has emissions policy dating back to 2006’s AB 32; but now a new goal has been stated by Newsom that will more than tap the brakes on carbon.  As reported by the Los Angeles Times, 15 years from now, beneficial electrification should be well advanced without new gas-powered auto sales.

“Newsom’s order directs the state Air Resources Board to develop and propose regulations that require increasing volumes of new zero-emission passenger vehicles sold, ‘towards the target of 100% of in-state sales by 2035′”—Los Angeles Times

Beneficial electrification has already sent ripples outward by fostering the development of a market beyond just automobiles.  Electric trucks up to Class 8 highway freight haulers are already past prototype status.  Multiple electric propeller planes for commercial use are in certification trials, and will take a future bite out of short-haul air carriers.  On a larger scale, Europe’s AirBus consortium announced development plans for liquid hydrogen fueled jets.

Hydrogen injected into existing gas distribution lines or replacing fossil fuels at base load electric generation plants is all carbon-free and climate neutral.

As our electric grid becomes powered more by renewables, excess daytime generation can’t be stored completely in grid-scale batteries.  But, we can utilize excess electricity to do what I did as a teen on the back porch with a 6-volt dry cell experiment—electrolysis that splits tap water’s oxygen from hydrogen, making two gases from what was previously a liquid.  Hydrogen can be combusted for electric or kinetic power, and can also be used in fuel cells to make electricity on demand—just as our space vehicles have done since the 1960s to support astronauts.

As you began reading this piece you knew you could expect it to migrate toward geo heat pumps (and you’re right).  Gas has been king for too long in California and has dominated regulatory affairs and supplies to new buildings.  The simple fact is that electrification can do everything that gas has done to date—but doing it more efficiently and healthier.  As utility grids migrate toward 100% renewable power, we get a triple whammy benefit.  In order to be greener, healthier and safer by electrifying, we:

1) can continue to utilize the existing electrical grid

3) will stop carbon emissions from all new buildings

Electric ovens and induction cooktops in the kitchen can eliminate indoor gas emissions.  When we lean on heat pumps (two-way versions of the common refrigerator) we can heat hot  water and heat or cool space.

The best of these heat pumps are geothermal (or ground-sourced units) that are tied to the earth by sub-surface heat exchangers.  They are the world’s most efficient and longest lasting equipment.  Their source of heating capacity and transfer of waste cooling energy deals with an underground medium that’s a perpetual resource.  This means no more summer “heat islands” in dense cities or humidification by cooling towers that serve conditioned space.

The earth is our potential thermal battery.  As soon as we decide to connect to it with a geo heat pump we will eliminate emissions forever in every installation.  That’s a great way to let woody plants store more of the remaining carbon that’s generated.  When we utilize electricity to run that equipment, we depend on a source that is becoming more renewable, every year.  Renewable resources are free.  We only have to assemble the infrastructure to capture and utilize it.  Extracting more carbon from below the earth’s surface so it can be leaked, burned and released as unwanted emissions is a fool’s errand; guaranteed to hasten our demise.

Posted in A Greener America

← Can Suffering Be Replaced By Solutions?
In Touch With Underground Physics →